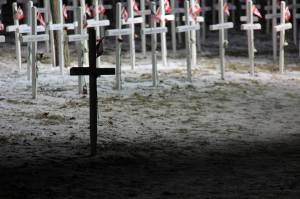 A group called “Our Duty” has gone public with a request that politicians stay away from November 11th Remembrance Day events. They say it is because the day is about remembering and memorializing, not about photo ops and politics. Here is the original article: http://ottawacitizen.com/news/national/defence-watch/no-photos-of-stephen-harper-or-any-other-politician-during-remembrance-day-please-group-askse.

Sorry, but I disagree with Our Duty. It IS about politics, because the men and women who have made wartime sacrifices did it so we could have the freedom to practice the politics of our choice. We elect politicians to represent us and speak for us on a global scale, and so this is right. Yes, remember the fallen, but allow the leaders who represent the nation they fell for to show solidarity and respect.

I would be more upset if our leaders did NOT show up at war monuments during this one solemn day a year. The elected officials who send our young people to die in foreign lands defending the rights and freedoms of others have a right themselves to publicly show that the decision is never easy and that they will not hide behind policies and committees.

Remembrance Day isn’t just about soldiers, it’s about humans, and what one human will sacrifice to defend the rights of another human. We should not forget the non-military personnel lost when the battles came to their homes and they stood beside the soldiers we sent over. Most of our troops get to come home…the locals ARE home.

So, let the leaders appear…but ban the media. It’s not a circus without the media making it so. The less-ethical politicians will keep themselves away if there’s no media, while the true leaders will still be there.

That’s my opinion.
Take it or leave it.

The Tao of RSS