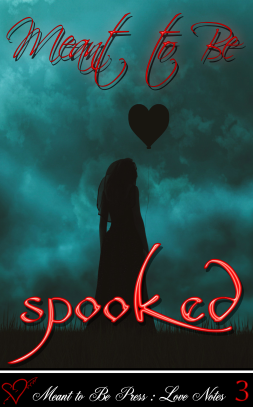 Have you ever wondered what it would be like to match make a ghost? Well, Jane Saunders is about to find out.

Jane Sanders is a professional matchmaker and her new client is to die for. Henry Roberts is a handsome and charming Englishman, someone every woman would want. There’s just one problem. Henry is also ghost, cursed to appear as each woman’s nightmare. Can Jane aid him in his hunt for true love? Or will she experience her first failure and condemn his soul to hell forever?

Check out this excerpt for a taste of what “Cursed by Cupid” has to offer.

The day Henry Roberts came to my door, was a dark and stormy one, but when he
crossed the threshold I felt as though a living, breathing ray of sunshine had stepped in. Not only was the man tall, dark-haired and handsome, he also had sparkling green eyes and a muscular frame that almost knocked me out of my chair.

He was everything I’d ever wanted and could never have.

But I’m getting ahead in my story. You don’t even know who I am.

My name is Jane Sanders, I’m 34 years old and I’m a matchmaker. I even run my own
agency, Cupid’s Arrow Matches. I live in a nice apartment on Augusta Drive in Moraga,
California, and I work in a pink office filled with Maplewood shelves and romance novels. I’m proud of my business. In ten years, I’ve never failed. All my matches are still married. If my love life were as successful as Cupid’s Arrow, I’d be a happy woman.

Which brings us back to the handsomest man I’d ever met. He was my newest client, a
Romeo seeking his Juliet. If I could’ve, I’d have matched myself with him. Unfortunately, I
could tell he wasn’t interested in Velma from Scooby-Doo.

“Good afternoon, Miss Sanders,” he said as he crossed the room. He moved slow and
cautious as though gauging my reaction.

I stared at him. Words formed in my mind but stopped short of my tongue. When I opened my mouth, they came out in a squeak.

“Welcome to Cupid’s Arrow Matches, Mr. Roberts,” I said and cleared my throat. “I’m
so glad you could make it.”

“Call me Henry,” he said, and flashed a quick smile which turned my knees to jelly. A
nervous giggle welled up inside me and I turned away before it bubbled out.

“Ok…Henry.” I pulled up his file on my desktop computer and pretended to study it.

“You came in today to discuss your computer matches. What seems to be the problem?”
Henry shifted in the chair and lowered his eyes. “I don’t know how to say this, but…I’m
afraid I withheld a vital piece of information from my questionnaire when I signed up for the
service.”

Warning bells went off in my mind and the images of several serial killers flashed before
my eyes.

“Uh-oh. Was it something illegal?”

“You have a divorce pending?”

“What’s the problem, then?”

He took a deep breath. “Forgive me for asking, but are you afraid of me?”

“As a matter of fact, you should. Are you sure I’m not frightening?”

“Is this the problem you’re having? You think your good looks scare women off?”

More like drop-dead gorgeous, but I wasn’t about to tell him that. “You’re handsome enough,” I replied.

Meant to Be…Spooked
Falling in love is scary,
especially in these four witty,
otherworldly tales from Meant to Be Press

“Parsers and Prejudice” by Emmy Z. Madrigal
Sometimes digital love is all you got.

In a future world, where men are all but extinct, Laney falls in love with her only companion, a male android built to meet her every need. But when a deadly virus sweeps the bot population, she must do everything she can to save the bot she loves.

“Cursed by Cupid” by Naching T. Kassa
Nothing is scarier than love.

Jane Sanders is a professional matchmaker and her new client is to die for. Henry Roberts is a handsome and charming Englishman, someone every woman would want. There’s just one problem. Henry is also ghost, cursed to appear as each woman’s nightmare. Can Jane aid him in his hunt for true love? Or will she experience her first failure and condemn his soul to hell forever?

“The Phone Booth” by M.M. Genet
What would you give for one last chance?

What would you give to talk one last time to someone you lost? Would you give up your
savings, your house or car? How about your best friend or a member of your family? After a tornado hits their small town, the names of the missing gradually become the names of the dead.
A haunted phone booth might give Ahi one last chance to call his missing girlfriend.

If not for the magic embroidered into her tattoos, Cherry would already be dead. Isaac’s life revolves around duty and protection, so he hardly has time for the rockabilly woman bringing chaos to his mountain. Sometimes, a little chaos is a wake-up call. Too bad what Cherry wants is at odds with what Isaac has to give. His secrets might be worse than hers.

An anthology of otherworldly love stories from Meant to Be Press authors.

The Tao of RSS